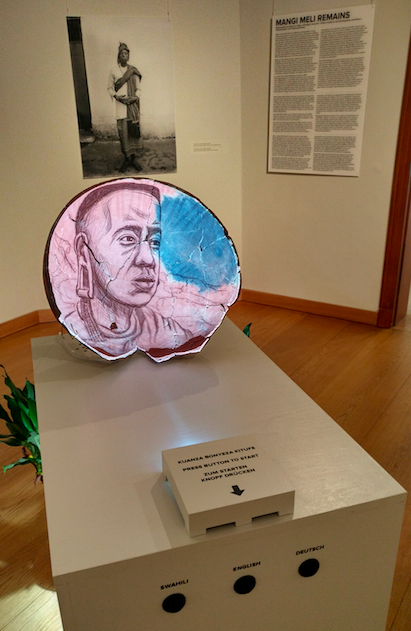 In Old Moshi, Tanzania, a head is missing. The head is of Chief Meli who fought the German colonial occupation of territory in Kilimanjaro and was executed as a result in 1900. His head is said to have been shipped to Germany at the request of the Ethnological Museum director Felix von Luschan. Von Luschan collected thousands of skulls from all over the world for scientific testing based on racial ideology. Many of the skulls, including those from Old Moshi, are still stored in Berlin. The search for the head of Chief Meli has been ongoing for over 50 years, led by Meli’s grandson but until now without success.

Yet traces of Chief Meli can still be found in songs, stories and archives. This has formed the basis for a Tanzanian-German collaboration where a video installation depicts the life story of Meli: as a freedom fighter, his violent death and the possible journey of his head. Re-examined historical photographs and documents complement the exhibition.

Mangi Meli Remains will travel from Berlin via Dar es Salaam to Old Moshi, where the exhibition will remain as a place of remembrance and a placeholder for Chief Meli’s missing head.